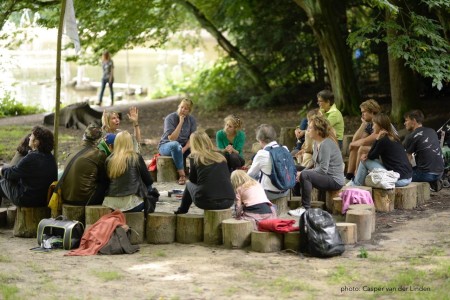 Scroll down for the exact schedule. The stories are told at the archaeological sand box in the park of the National Museum of Finland.

Artists Kalleinen & Kochta-Kalleinen (Tellervo Kalleinen & Oliver Kochta-Kalleinen) looked for stories about conflicts that were amicably settled. The stories they received came from different areas of life and society and were taking place in different parts of the world. A selection of the stories will be retold at Temporary Pavilion for Permanent Negotiations! The story teller is a Dutch mediator Chantal van Doesburgh, who also facilitates discussion, which the conflict stories might raise. Come and join us!

11.30 CONFLICT BETWEEN TEACHERS
A drama teacher gives theatre classes at a school, sees violence in the class and learns that the permanent teachers of the school deny the behaviour problems of the children.

12.30 CONFLICT IN A MARRIAGE
Divorce after a long marriage is not easy when communication doesn’t work, especially when you have a child together.

13.30 CONFLICT BETWEEN BUSINESS PARTNERS
New business partners have trust problems between each other, and they seek help from a professional mediator.

15.30 A LIFE SAVING STORY
A party turns out into a horror as Xana is locked into a room and a group of men walk in.

16.30 CONFLICT ABOUT INHERITANCE
Lisa´s family breaks apart when her grandmother bequeathed everybody´s beloved house for one of her three children only.

17.30 CONFLICT BETWEEN NEIGHBOURS
Tilda´s summer cottage neighbour is bullying her, and she discovers that already her parents and grand parents had the same issues with the cottage neighbours.

Temporary Pavilion for Permanent Negotiations will take place on Saturday 12th of August as part of the exhibition Studio Aleppo [Helsinki] . It is organized in cooperation with the Suomen kansallismuseo – The National Museum of Finland, MiklagardArts and Kulttuurikeskus Caisa (International Cultural Centre Caisa).

We would like to thank Hakunilan kansainvälinen yhdistys- Hakunila International Society for their contributions!

The National Museum of Finland’s Studio Aleppo [Helsinki] is part of an international series of events, the goal of which is to strengthen the importance of empathy and equality in the discussion concerning immigration. Studio Aleppo [Helsinki] is a pop-up photography studio of Juuso Westerlund and exhibition that brings together new and old citizens of Finland. For further: http://www.kansallismuseo.fi/en/nationalmuseum/exhibitions/temporary#Aleppo_eng

Oliver will be speaking at the ENGAGE International Conference in Leeds November 9 and 10.

Oliver will be speaking at the last lunch-bytes session in Helsinki. This session focuses around the topic “The Commons”:

[… a concept that has gained attention in recent debates on online culture, as well as cultural production more generally. In its original meaning the term “commons” refers to land or a public area that is open for collective use, shared, managed and maintained by a collective. In today’s art world, the commons is often used in reference to spaces and practices that are shared by groups aiming to resist commodification and forge an existence outside the capital-driven art market, or to sites for art-related organisations and groups threatened by gentrification. Art is here considered a common good that should be accessible to everyone rather than being subjected to the enclosures generated by market forces.

If we turn to online culture and its history, one can see a significant shift in how networked environments have been perceived as common spaces. The 1990s ideal of cyberspace where knowledge and resources are shared freely has mostly given way to the realisation that the web has become a commercial and enclosed space. The creative commons movement has largely been swallowed by the web 2.0, where services are freely accessible to all but valorised by only a few. Still, the emergence of the internet has also opened up more sustainable models for autonomous production. Free software, open data, and peer-to-peer networks are examples of common online resources and initiatives that enable exchange outside (or alongside) the commercial networked platforms

Looking at these developments, this Lunch Bytes event asks a number of explorative and critical questions such as: What are the consequences of the fact that our spaces for cultural production both on- and offline are increasingly privately owned and subject to control by corporate interests and government agencies? What kind of communities do the shared and networked spaces to which users contribute and look after, ranging from Wikipedia, peer to peer networks, to e-flux’s Time/Bank project (a platform and community for the arts where goods and services can be exchanged without the use of money) constitute? What role can artistic practices play in such a processes?

How do alternative spaces and forms of sociality emerge in a city like Helsinki when it comes to the production, exhibition and discussion of art?

Departing from these questions, the discussion will look at alternative ways to collectively manage resources for artistic production, such as on- and offline spaces, exhibition rooms, tools of production, and networks for knowledge exchange and production. It will inquire what the consequences are when concepts related to “the commons” meet with the realities of production. Furthermore, it will critically discuss the value of “the commons” in relationship to the widely shared experience of precarity, as public funding for the arts is eroding and entrepreneurial strategies seem to govern both the arts and the current online environment. …]

Our new project ARCHIPELAGO SCIENCE FICTION explores people’s visions, hopes and fears about the Finnish Arcipelago in 100 years – in the form of short cinematic presentations! For this project we would kindly ask people who live(d) full or part time in Turku Archipelago, to fill in this questionnaire. Feel free to fill in only those parts that interest you.

You are also welcome to the workshop and the film shootings – the project is made in talkoo spirit! In the workshop we collectively work on all the answers and start putting them into film language. Each workshop takes ca 4hours. Choose the best time and place for you. The exact times will be found from here later on. The workshop schedule is:
Friday 7.1.2011 at Korppoo
Saturday 8.1.2011 at Utö
Tuesday 11.1.2011 at Houtskär

Contact us for registrations or questions. Information about the film shootings will be found here later on. Please spread the word!

THE MAKING OF UTOPIA SCREENING AT THE IMPAKT FESTIVAL!

The Making of Utopia will be soon on view as part of The Annual Impakt Festival. It is shown as part of a screening programme presenting imaginations about non-urbanity and urban voids. The festival takes place in Utrecht, Netherlands.

We are happy to have been selected to 4th Cairo Video Festival, focusing on video art and experimental films. Dream Land will be shown as part of The Distribution Centre for Finnish Media Art’s (AVEK) screening series. Curated by Dia Hamed.

Our video work presenting musical moaners from Singapore, Chicago and Tokyo was on view at Kiasma-Theater as part of Demo Wednesday, curated by Leevi Haapala.

PEOPLE IN WHITE PREVIEW AT MADNESS AND ARTS -FESTIVAL

People in White is our new cinematic documentary in which patients share their experiences of their treatment providers. The premiere of this work was screened during multidisciplinary Madness and Arts -festival in Haarlem, Netherlands on September 25. The very first preview was followed by a discussion with a psychiatrist and curator Nina Folkersma.

Read more about the new work!

Vocal Thoughts is an exhibition focusing on various forms of mental unrest, bringing to the fore exchanges that are largely left unspoken, or sometimes engaged with a closed mind. The complete Complaints Choir was seen as part of this intriguing project at Contemporary Art Centre of South Australia, curated by Peter Mc Cay.

Compilation of Complaints Choirs will be on display as part of touring group exhibition ARCTIC HYSTERIA, this time in Kuntsi Art Museum of Modern Art in Vaasa. The exhibition is curated by Marketta Seppälä and Alanna Heiss.