We are happy to show our new video piece Forms of Social Distancing at Ars Kärsämäki (Kärsämäki, Finland). Thank you Raisa Raekallio & Misha del Val for the invitation.

Hi! We hope you are well and safe!

Here some words how the Covid 19 -pandemia influenced our plans so far.

We were supposed to start a new project in Armenia in spring 2020, in collaboration with artasfoundation. We stayed home instead. After the first confusion we took time to think, talk, cook, watch movies, make music and learn.

During the lockdown of Uusimaa county we produced an art piece “Forms of Social Distancing”. Liisa Vihmanen from national broadcast company YLE had contacted us and commissioned a new piece in 2 weeks time frame!  YLE went through some extraordinary time as well, as all their sports programs had to be replaced by something else in no time.  Forms of Social Distancing came out in YLE Olohuone in April, and a re-edited version of it will be installed in Ars Kärsämäki 13 June – 31 July 2020.

In March Tellervo started regular online meetings with artists Susanne Bosch from Berlin and Chrissie Tiller from London. Together they wanted to share their long experiences in the field of participatory art. The original plan was to share and experiment face to face, but it turned out that the zoom sessions worked surprisingly well for deep exchange. We just heard the news that their project got funding from LADA, London, and will take further shape in fall 2020 in collaboration with LADA and Heart of Glass, UK!

Oliver took this change to learn more about AI through online courses in Aalto and Harvard Universities!

It was a big relief to notice that we can safely continue our major long term project Keskustelupuisto (Common Ground Park) in collaboration with Lönnström Art Museum. The meetings with the participants were moved online.  As planned, the new park in Rauma will be ready for the opening party 12 September!

Thanks for taking time to read about our Covid-19 times.

Common Ground – A Public Space Game (Keskustelupuisto) web site is launched, and the project is now open for applications! Anyone living in Rauma, Finland, can apply. The project will involve 36 residents who reflect the age distribution of the local population. They will design and realise a public park within a game-like process April 2019 – August 2020. The game will consist of six moves that begin with individual views and move gradually toward collectiveness. In the beginning, the park will be divided into 36 parts, with each participant initially receiving one part to design. A sum of 200 euros per person will be reserved for each move in the game. After the initial individual move, participants will get a chance to cooperate during moves 2–5; they can merge their plots and pool their allocations. The changes to the park will be implemented as the game progresses. The sixth move can only be made by unanimous decision. A sum of 14,000 euros will be reserved for the last move. When all changes are made, a party will be held to celebrate completion of the project. The project is collaboration with Lönnström Art Museum.

We are honoured to have the Finland premiere of Tracking Dar Es Salaam at Mänttä Art Festival (17 June – 31 August, 2018), curated by Veikko Halmetoja.

The work is an interactive video installation, which shows parallel realities of Dar es Salaam through one ordinary weekday of 11 local inhabitants. The spectator have to make choices which of the video clips to watch, recorded in different parts of the city during that day – which of the people to follow and listen. The soundtrack consists of recorded interviews with the participants as well as music, which is individually composed for each of the 11 inhabitants.

This work was originally curated by ZK/U, funded by Habitat Unit / Technische Universität Berlin, AVEK and Taike, Finland and hosted by Nafasi Art Space in Dar es Salaam. The music for the work was composed by Nick Martin and Tellervo Kalleinen.
Share
23. April 2018 In Allgemein By tek

In Avatar Influence Game, commissioned by m-cult, three different groups from Maunula neighbourhood try to influence their surroundings through an avatar. They control the avatars real time – played by actors Outi Vuoriranta, Niina Sillanpää and Max Bremer – as the avatars move within the local ‘game zone’.

We are happy to announce that our project proposal, submitted to the open call of Lönnström Art Museum, was selected. The generous production sum of 150 000 euro allowed us to think big, and we developed the concept COMMON GROUND – A Public Space Game.

We´ll invite 36 people to turn an appointed piece of land into a public park within a two year process. The design process has six devolvement stages, which we call “the moves”. The 36 people are representative for the age distribution in the area.

The project is a journey from individual visions into a collective process. For each of the moves the participants can use 200 euro each. In the first move the participants implement their individual ideas to their own small plot, basing on their own vision of the park. The moves 2-5 bring them into interaction with the ideas of the other participants, and they can choose whether to continue working alone or combine ideas, plots and the money with some fellow participants. The move 6 is a collective one, and it takes place only if the group has a consensus of what to do with 14000 euro. When the park is ready, we´ll celebrate!

Locals and the internet audience can follow how the park develops. The interviews, which are done before and after the process, capture the participants´thoughts about ownership, differences and collective decision making. The interviews can be listened in the park after it gets ready.

101 For All -video installation, containing 65 hours of video, is now fully translated in English. The work can be seen at Seinäjoki art hall! See the trailer here.

Scroll down for the exact schedule. The stories are told at the archaeological sand box in the park of the National Museum of Finland.

Artists Kalleinen & Kochta-Kalleinen (Tellervo Kalleinen & Oliver Kochta-Kalleinen) looked for stories about conflicts that were amicably settled. The stories they received came from different areas of life and society and were taking place in different parts of the world. A selection of the stories will be retold at Temporary Pavilion for Permanent Negotiations! The story teller is a Dutch mediator Chantal van Doesburgh, who also facilitates discussion, which the conflict stories might raise. Come and join us!

11.30 CONFLICT BETWEEN TEACHERS
A drama teacher gives theatre classes at a school, sees violence in the class and learns that the permanent teachers of the school deny the behaviour problems of the children.

12.30 CONFLICT IN A MARRIAGE
Divorce after a long marriage is not easy when communication doesn’t work, especially when you have a child together.

13.30 CONFLICT BETWEEN BUSINESS PARTNERS
New business partners have trust problems between each other, and they seek help from a professional mediator.

15.30 A LIFE SAVING STORY
A party turns out into a horror as Xana is locked into a room and a group of men walk in.

16.30 CONFLICT ABOUT INHERITANCE
Lisa´s family breaks apart when her grandmother bequeathed everybody´s beloved house for one of her three children only.

17.30 CONFLICT BETWEEN NEIGHBOURS
Tilda´s summer cottage neighbour is bullying her, and she discovers that already her parents and grand parents had the same issues with the cottage neighbours.

Temporary Pavilion for Permanent Negotiations will take place on Saturday 12th of August as part of the exhibition Studio Aleppo [Helsinki] . It is organized in cooperation with the Suomen kansallismuseo – The National Museum of Finland, MiklagardArts and Kulttuurikeskus Caisa (International Cultural Centre Caisa).

We would like to thank Hakunilan kansainvälinen yhdistys- Hakunila International Society for their contributions!

The National Museum of Finland’s Studio Aleppo [Helsinki] is part of an international series of events, the goal of which is to strengthen the importance of empathy and equality in the discussion concerning immigration. Studio Aleppo [Helsinki] is a pop-up photography studio of Juuso Westerlund and exhibition that brings together new and old citizens of Finland. For further: http://www.kansallismuseo.fi/en/nationalmuseum/exhibitions/temporary#Aleppo_eng 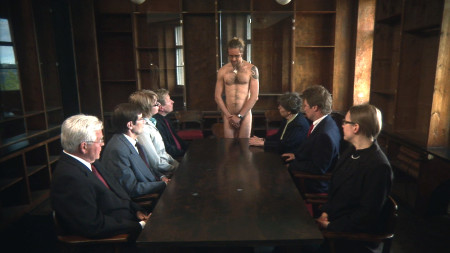 Dreamland is part of “Joka hetki on poikkeus” – the 60 year anniversary exhibition of The Finnish State Art Collection at Riihimäki Glass Factory. Dreamland is a film montage containing dramatizations of dreams of Finnish citizens in which the President of Finland makes an appearance.

One needs creativity in dealing with conflicts. Welcome to explore that at
TEMPORARY PAVILION FOR PERMANENT NEGOTIATIONS at Cure Park / Amsterdamse Bos, Amsterdam 4 June – 16 July.

Kalleinen & Kochta-Kalleinen created a space for playing with conflicts. They called on people to tell a story about a conflict: at work, in a relationship, in the neighborhood or on a world scale. The collected conflicts have one thing in common: they were (ultimately) resolved. What happened, and how did the situation transform? These conflicts and their resolutions will be retold by a facilitator Chantal van Doesburgh every Saturday and Sunday 4 pm (except June 17 and 18).  See the full schedule here The work is produced by TAAK and supported by FRAME Finland.

PEOPLE IN WHITE, a film that explores the relationship between doctor and patient in mental health care from the point of view of 10 patients, is screened 5 June 6pm at Care Centre of Cure Park / Amsterdamse Bos. In the film a central artistic device is re-enactment of key moments in the therapeutic process in which former patients play themselves as well as their doctors. Memories vary from beautiful, healing moments to the horrors of isolation and abuse.